commentAfter such a galactic year 2022 on four counts, what more could Santa Claus ask for? More titles? Nah Santa will get four very specific points from me that he would like to see in 2023 at Real Madrid. My wishlist – from the Bernabéu to contract extensions.

My wishlist for Real Madrid in 2023

In order to be in good shape for Louis, my soon-to-be-one-year-old son, I can practice: writing a wish list. Gifts in Spain won’t be available until January 6, but my wishes for Real Madrid in 2023 are clear. And break it down into four points:

1. Ready for the stadium

Actually, the conversion should have been completed in the winter of 2022, but hey, for free. Corona and others. But as there is still SO MUCH to do, both above and below the pitch, I have only one wish: to make sure the Bernabéu is truly ready for the summer of 2023 as announced Florentino Perez. And not only to avoid additional costs and finally to satisfy my curiosity and my nostalgia for what is guaranteed to be the best stadium in the world, but also for certain players. Because I’m sure: to be able to play in the new Bernabéu from 2023/24 will be one more reason for legends like Luka Modric, Karim Benzema – okay, they will definitely extend anyway – especially Toni Kroos and Nacho Fernandez. So please: While others are just getting started with gigantic conversion measures, Real Madrid would already be in the future in terms of construction technology.

It’s clear, every title is important and Real Madrid are always fighting for every blah. But “even more impossible” than restarting the Copa del Rey is probably: defending the championship. And not because Barcelona are currently two points clear of Real – the cards will be reshuffled after the World Cup – but because Los Blancos last defended the league 14 (!) years ago! 2006/07 was an amazing season with even points, 2007/08 was more confident. Will 2021/22 and 2022/23 be reversed? With a bit of luck! And to be honest: four years none Barca– Championship, it would also be a festive performance! Anyway, the main title for me next year is the championship. If first class falls off the truck again, I won’t fight either – just not another 24 hour stream bet.

3. No Mbappé, but a new attacking star

There is no doubt: Kylian Mbappé is and remains – perdón – the hottest kicker on the planet. And this for the next five to ten years! We shouldn’t kid ourselves: Real Madrid could of course really use someone like that from a sporting and marketing point of view. But I stick to it: one or the other this I don’t want Mbappé, greedy not only for titles, but also for money and power, who doesn’t keep his word, shows off his ego, etc. Under very specific conditions (say: free transfer, 3,000 net, don’t touch image rights so much, and the whistles only stop after the 100th goal – Please sign here, Kylian!) I could of course forgive him. But the way he treated Real Madrid – you can’t treat a real club like that – it has to have consequences, you have to be consistent. And if the biggest club in the world can’t stand above it, who can? Then it’s better to look elsewhere: However, one of the other two “greatest kickers on earth” will probably not be available until 2024 or later. Haaland is not yet available, we have Vinícius. And in front? Maybe a Dzeko, Giroud or Cavani as Benzema’s replacement after all? Something outside is also welcome. Gnabry? Chiesa? pine? ¿Why not? There are a few possibilities, but Pérez and Co. must gradually recognize the need – that is my true wish – and move away from the property of the sheikh. 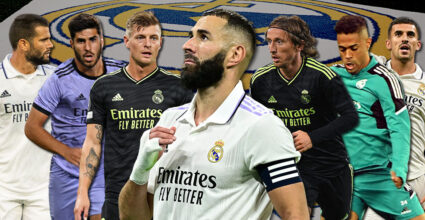 I know there are a few “missings”. Sorry Asensio, Ceballos and Mariano. Under certain conditions, I could imagine more for the first two at least, but Real Madrid have missed the moment of separation with too many players in recent years. The other four must have priority anyway: Luke modric (now the midfield goat?) has more than deserved the end of his Madrid career and has at least a year left in the tank, Tony Croos would still have more in the tank, but doesn’t want to play forever with his soon-to-be 33-year-old and needs to be convinced not to ‘throw away’ this current super form and stop too soon like Zidane once did. Nacho Fernández is and will remain an affair of the heart, even if he is now only the number four central defender, he “must” become the first one-club man since Manolo Sanchís (retired in 2001). In the case of Karim Benzema, I don’t yet see him retiring to Madrid like his three colleagues – the ‘problem of attackers’, see Raúl, Ruud, Alfredo, Butragueño, Hugo and Co – but it is just as important for present and future growing players. I would be happy to donate pens. And if it’s not just Santa Claus reading this: Please extend, boys, it’s not just the new Bernabéu that is hoping and waiting for you!

After such a galactic year 2022 on four counts, what more could Santa Claus ask for? More titles? Nah Santa will get four very specific points from me that he would like to see in 2023 at Real Madrid. My wishlist – from the Bernabéu to contract extensions.